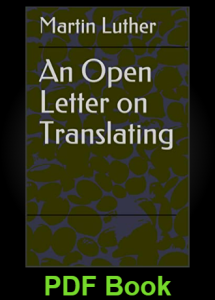 Click here to Download An Open Letter on Translating PDF Book by Martin Luther Language English having PDF Size 1 MB and No of Pages 20.

We have seen that bungler from Dresden play master to my New Testament. (I will not mention his name in my books as he has his judge and is already well-known). He does admit that my German is good and sweet and that he could not improve it.

An Open Letter on Translating PDF Book by Martin Luther

About Book – An Open Letter on Translating PDF Book

Yet, anxious to dishonor it, he took my New Testament word for word as it was written, and removed my prefaces and glosses, replacing them with his own. Then he published my New Testament under his name! Dear Children, how it pained me when his prince in a detestable preface condemned my work.

You will see who did the translation for both. He has patched it in places and reordered it (and although it does not all please me) I can still leave it be for it does me no particular harm as far as the document is concerned. That is why I never intended to write in opposition to it.

But I did have a laugh at the great wisdom that so terribly slandered, condemned and forbade my New Testament, when it was published under my name, but required its reading when published under an other’s name! What type of virtue is this that slanders and heaps shame on someone else’s work, and then steals it, and publishes it under one’s own name.

A Dome of Many-coloured Glass PDF

Ballads of a Cheechako PDF

Life on the Mississippi PDF

Thereby seeking glory and esteem through the slandered work of someone else! I leave that for his judge to say. I am glad and satisfied that my work (as St. Paul also boasts ) is furthered by my enemies, and that Luther’s work, without Luther’s name but that of his enemy, is to be read.

What better vengeance?! Returning to the issue at hand, if your Papist wishes to make a great fuss about the word “alone” (sola), say this to him: “Dr. Martin Luther will have it so and he says that a papist and an ass are the same thing.” Sic volo, sic iubeo, sit pro ratione voluntas.

I will it, I command it; my will is reason enough) For we are not going to become students and followers of the papists. Rather we will become their judge and master. We, too, are going to be proud and brag with these blockheads; and just as St. Paul brags against his madly raving saints, I will brag over these asses of mine! An Open Letter on Translating PDF Book

Subsequently, for these literalist asses I would have to translate it: “Why has this loss of salve occurred?” But what kind of German is this? What German says “loss of salve occurred”? And if he does understand it at all, he would think that the salve is lost and must be looked for and found again; even though that is still obscure and uncertain.

Now if that is good German why do they not come out and make us a fine, new German testament and let Luther’s testament be? I think that would really bring out their talents. But a German would say “Ut quid, etc..” as “Why this waste?” or “Why this extravagance?” An Open Letter on Translating PDF Book

Even “it is a shame about the ointment”— these are good German, in which one can understand that Magdalene had wasted the salve she poured out and had done wrong. That was what Judas meant as he thought he could have used it better. Now when the angel greets Mary, he says: “Greetings to you, Mary, full of grace, the Lord is with you.”

Well up to this point, this has simply been translated from the simple Latin, but tell me is that good German? Since when does a German speak like that— being “full of grace”? One would have to think about a keg “full of” beer or a purse “full of” money. So I translated it: “You gracious one”.

“God says hello, Mary dear” (for that is what the angel was intending to say and what he would have said had he even been German!). If I had, I believe that they would have hanged themselves out of their great devotion to dear Mary and because I have destroyed the greeting. Yet why should I be concerned about their ranting and raving?

I will not stop them from translating as they want. But I too shall translate as I want and not to please them, and whoever does not like it can just ignore it and keep his criticism to himself, for I will neither look at nor listen to it. They do not have to answer for or bear responsibility for my translation.

Listen up, I shall say “gracious Mary” and “dear Mary”, and they can say “Mary full of grace”. Anyone who knows German also knows what an expressive word “dear”(liebe) is: dear Mary, dear God, the dear emperor, the dear prince, the dear man, the dear child. An Open Letter on Translating PDF Book Download

I do not know if one can say this word “liebe” in Latin or in other languages with so much depth of emotion that it pierces the heart and echoes throughout as it does in our tongue. To this I can, with good conscience, give witness—that I gave my utmost effort and care and I had no ulterior motives.

I have not taken or wanted even a small coin in return. Neither have I made any by it. God knows that I have not even sought honor by it, but I have done it as a service to the blessed Christians and to the honor of the One who sits above who blesses me every hour of my life that had I translated a thousand times more diligently.

I should not have deserved to live or have a sound eye for even a single hour. All I am and have to offer is from his mercy and grace—indeed of his precious blood and bitter sweat. Therefore, God willing, all of it will also serve to his honor, joyfully and sincerely. An Open Letter on Translating PDF Book Download

I may be insulted by the scribblers and papists but true Christians, along with Christ, their Lord, bless me. Further, I am more than amply rewarded if just one Christian acknowledge me as a workman with integrity. I do not care about the papists, as they are not good enough to acknowledge my work and, if they were to bless me, it would break my heart.

I may be insulted by their highest praise and honor, but I will still be a doctor, even a distinguished one. I am certain that they shall never take from me until the final day. Yet I have not just gone ahead, ignoring the exact wording in the original.

Instead, with great care, I have, along with my helpers, gone ahead and have kept literally to the original, without the slightest deviation, wherever it appeared that a passage was crucial. For instance, in John 6 Christ says: “Him has God the Father set his seal upon (versiegelt).” An Open Letter on Translating PDF Book Download

A right, devout, honest, sincere, God-fearing Christian, trained, educated, and experienced heart is required. So I hold that no false Christian or divisive spirit can be a good translator. That is obvious given the translation of the Prophets at Worms which although carefully done and approximating my own German quite closely.

Does not show much reverence for Christ due to the Jews who shared in the translation. Aside from that it shows plenty of skill and craftsmanship there. So much for translating and the nature of language. However, I was not depending upon or following the nature of language when I inserted the word “solum” (alone) in Rom. 3 as the text itself. An Open Letter on Translating PDF Book Free

And St. Paul’s meaning, urgently necessitated and demanded it. He is dealing with the main point of Christian doctrine in this passage—namely that we are justified by faith in Christ without any works of the Law. In fact, he rejects all works so completely as to say that the works of the Law, though it is God’s law and word, do not aid us in justification.

“If Abraham is justified by works, he may boast, but not before God.” However, when all works are so completely rejected—which must mean faith alone justifies—whoever would speak plainly and clearly about this rejection of works would have to say “Faith alone justifies and not works.” The matter itself and the nature of language necessitates it. An Open Letter on Translating PDF Book Free

As it is not proper in the matter of divine worship for us to do anything that is not commanded by God (and that whoever does is putting God to the test), it is therefore also not advisable or tolerable for one to call upon the saints for intercession or to teach others to do so.

In fact, it is to be condemned and people taught to avoid it. Therefore, I also will not advise it and burden my conscience with the iniquities of others. It was difficult for me to stop from worshipping the saints as I was so steeped in it to have nearly drowned.

But the light of the gospel is now shining so brightly that from now on no one has an excuse for remaining in the darkness. We all very well know what we are to do. This is itself a very risky and blasphemous way to worship for people are easily accustomed to turning away from Christ. An Open Letter on Translating PDF Book Free

They learn quickly to trust more in the saints than in Christ himself. When our nature is already all too prone to run from God and Christ, and trust in humanity, it is indeed difficult to learn to trust in God and Christ, even though we have vowed to do so and are therefore obligated to do so.

Therefore, this offense is not to be tolerated whereby those who are weak and of the flesh participate in idolatry, against the first commandment and our baptism. Even if one tries nothing other than to switch their trust from the saints to Christ, through teaching and practice, it will be difficult to accomplish, that one should come to him and rightly take hold of him.

One need not paint the Devil on the door—he will already be present. We can finally be certain that God is not angry with us, and that even if we do not call on the saints for intercession, we are secure for God has never commanded it. God says that God is a jealous God granting their iniquities on those who do not keep his commandments. An Open Letter on Translating PDF Book Free

But there is no commandment here and, therefore, no anger to be feared. Since, then, there is on this side security and on the other side great risk and offense against the Word of God, why should we go from security into danger where we do not have the Word of God to sustain, comfort and save us in the times of trial?