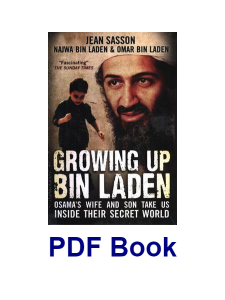 From the moment he came to the world’s attention, Osama bin Laden has meticulously guarded even the most impersonal details about himself and his wives and children. This lack of private information about Osama bin Laden and his immediate family has fed the world’s imagination ever since September 11, 2001.

While there have been many books published about Osama bin Laden and his al-Qaeda organization, this is the first book written from inside Osama bin Laden’s family life, with personal accounts directly from his first wife, Najwa, and their fourth-born son, Omar. I want readers to know that nothing in Growing Up bin Laden has been filtered through the opinions of this writer. Memories of events, stories, and personal thoughts have come straight from Najwa and Omar to me.

Although I was startled by certain revelations, I let the truth of the bin Laden family life unfold naturally. Like other members of the vast bin Laden family, Najwa and Omar are not terrorists. Neither has ever harmed anyone, but are in fact two of the kindest individuals it has been my pleasure to know. It is important to remember that this book is about the private life of Osama bin Laden and his family.

Please keep in mind that his son Omar bin Laden was a young boy until the time he lived in Afghanistan, and that Omar’s mother, Najwa, lived in isolation during her marriage according to her husband’s wishes. This is strictly a personal account of family life because much of Osama bin Laden’s political, militant, and Islamic life was hidden from his wife and son, although it permeated their own lives in ways they did not always understand at the time.

During the turbulent years they were living with Osama bin Laden, Omar and Najwa were often occupied with survival rather than with keeping notes or diaries. They acknowledge that the timing and dates of family events may not always be exact, and ask that readers consider that the information in this book is essentially an oral history, and therefore subject to the omissions of memory.

Finally, although this book is the story of Najwa and Omar, and their recollections and views as they recounted them to me, the reader should understand that those clearly identified materials I have added to the narrative—this and other author’s notes in the text and the Appendices at the end of the book—reflect solely my views and opinions and not those of Omar or Najwa bin Laden.

When seeking to deepen our knowledge of those who bring great harm to the world, perhaps we should be guided by the words of Sir Winston Churchill at the end of World War II: Now that it is over we look back, and with minute and searching care, seek to find its criminals and its heroes. Growing Up Bin Laden PDF Where are they? Where are the villains who made the war?… We ought to know; we mean to know. Smarting under our wounds, enraged by our injuries, amazed by our wonderful exertions and achievements, conscious of our authority, we demand to know the truth, and to fix the responsibilities.

The Power Of Now PDF

3 Mistakes of My Life PDF

A Court of Mist and Fury PDF

They Both Die At End PDF

People are not born terrorists. Nor do they become terrorists in a single stroke. But step by step, like a farmer preparing a field for planting, their lives unfold in a pattern that leaves them prepared to receive the seed of terrorism. Free PDF Books Download And so it was with Osama bin Laden. And the man, men, and events that planted that seed faded away. But the seed grew and the terrorist walked. And the man before, became the terrorist thereafter. Najwa Ghanem bin Laden knows only the man. The West knows only the terrorist.